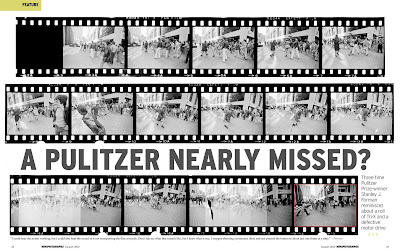 Photographer Stanley Forman came to Digital Silver Imaging a few months back to discuss his images and "brainstorm" about how we might work together.  He has been successful at selling some of his singular Pulitzer Prize  winning photographs, including Old Glory and Fire Escape Collapse. We suggested creating a digital contact sheet from that fateful day when he captured the images that make up Old Glory.  As you look through the images, the sequence that appears rolls like a film.  The brutality is not easy to look at, but the images, the bystanders, that lead up to the final frame are important in the context that Stanley Forman captured these images.
This month, NPPA's News Photographer Magazine ran a feature story and they used our digital contact image that we created.  Following is an excerpt from the full article:
Forced busing was in its’ second year the Spring of 1976 holding steady a sense of outrage and heated passion for citizens of Boston. A pleasant April day I reported to the City Room and was cleared by my editor, Al Salie, to join Gino (Gene Dixon) at the latest anti-busing demonstration at City Hall. I found a parking spot on Cambridge Street, grabbed Glossy, my dog, two Nikon F’s with 3 lens and 2 motor drives.
Anti-busing proponent and City Counselor, Louise Day Hicks, had hosted a group of students in the Chambers for a salute to the flag, served with cookies and milk. Pouring onto the Plaza steps after the reception, this group of demonstrators confronted a second group of students invited to tour the Hall. Tempers flared and some shoving began.

I had a 135mm lens and motor drive on one camera and a 35mm on the other. As the shuffling began I switched my 35 mm lens to a 20 mm. Over my shoulder I saw a Black man (later identified as Ted Landsmark) approach the Plaza from Washington and State and immediately thought he would be a target.

I felt like I was watching a Clint Eastwood movie, witnessing the slow-motion moment when the gauntlet is tossed before igniting the outbreak of violence. I started taking photos with the 20 mm lens. Detecting a sound I realized the motor wasn’t transporting  film. I stopped shooting continuous shots and pressed the button for one frame at a time.

The victim, Ted Landsmark, was transported to the Mass General Hospital. The crowd worked it’s way to the Federal Court House in Post Office Square. Once there I was told to run my shots into the Herald by reporter, Joe Driscoll. I did not grasp the magnitude of what I captured until later that day.

AP and the Globe had tried to cover it from a bad angle and before the real action began. I had the best shots. The demonstration had come to me. I took my chances and developed my film in the unreliable Kodak Versamat at the office, known to shred film like a pasta-maker. It developed just the way it should have.

The editors were very frightened by the series of images captured on my contact sheet. It was a volatile situation, it was busing, and this was Boston.  As fate would have it, Howard Hughes had died that day. Appeased by sharing front-page space with other big news, they no longer feared showing the racism that rang out that day on the top of page one.

We were the first paper in Boston to get motor drives and the whole staff got one Nikon F with a motor drive and 4 lenses: 20, 35, 135 and 200.  We had community lens in the locker for longer telephotos.  I bought my own second Nikon F camera. I was always prepared and I got my shot.

Working with Digital Silver Imaging I have reprinted the original contact sheet. It allows me to show the full impact of the photo series. The full story did not run then but can be viewed in new light today. For prints contact www.digitalsilverimaging.com.
at 6:32 PM No comments: 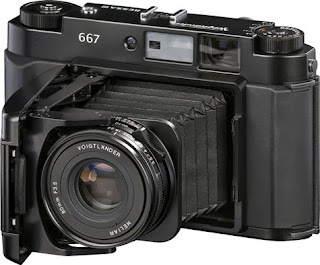 From the London Photographic Association:

"It cheered me up to see that Fujifilm are launching a new medium format film camera this spring. We are not sure when it will sell in the UK as yet.

First shown as a prototype at the Photokina trade show in Cologne last year, the GF670 Professional will now be released in Japan in mid-March as a portable folding bellows camera, jointly developed by Fujifilm and Cosina. The production may be limited to just 5000 units.

Its most unusual feature is a mechanism for switching between two different film formats - 6x7cm and 6x6cm. It is also fitted with an 80mm f/3.5 fixed focal length lens, which is composed of six glass elements in four groups. The GF670 has an automatic lens shutter, and an SPD sensor with both automatic and manual autofocus. The ISO sensitivity ranges from 25 to 3200."
at 3:03 PM No comments: 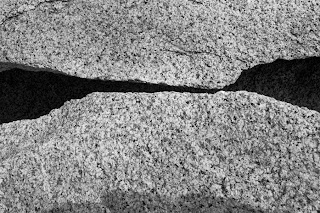 A high school Math teacher Jonathan blends two areas of deep personal interest – Math and Photography in highly detailed abstract configurations of sea and granite from Cape Ann.
Where we may see aspects of nature, he sees underlying mathematical theory. His interest is the unifying perspective between everyday objects and the surrounding space.
at 12:10 PM No comments: