Friday's opening of Jonathan Stark's France:Chaleur was a celebration of the warmth found in sweeping views of Paris, the French countryside and the depth of character of it's people. Shot on film during successive trips abroad the fiber silver gelatin prints are as soulful as their subjects. Intimate glimpses of Gallic pride shine from the soft eyes of a daper, elderly gentleman and the crisp attentiveness of a grandly mustached geradement. Stark caught Paris from the seat of a famed carousel, which no longer exists, allowing the vantage point of a bird surveying the quiet elegance of Hausmann's orderly and grand design for the city of light. Caught at night the Eiffel tower is it's quintessential playful self. Stark unobtrusively documents the serious pastime of a game of boule and the care and precision given to measuring the competition. These Black & White images exude a reverence of the ordinary while acknowledging the depth of tradition. Powdered truffles, fluted madeleines and red wine aside, these images transport the viewer to a place where time honored craft and care warm the heart.

Tom Ashe from The School of Visual Arts and color management 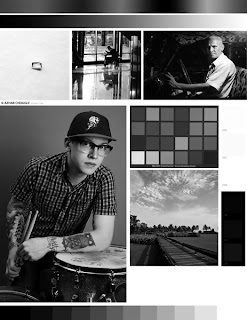 For the past six years in the Fall and Spring semesters I have been teaching a course I created in Digital Printmaking and Color Management as part of the BFA Photography program at the School of Visual Arts in New York City. The aim of the course is to help the students to be knowledgeable about different printmaking technologies and how to produce the best quality digital prints possible. One of the biggest challenges for my students is creating good quality digital black-and-white prints. That’s why an important part of the Black-and-White Digital Printing Assignment is to have the students make a true silver gelatin digital print. Although, most students come to the class not knowing that this is even an output option, they are even more surprised to find out they can get digital output on the same fiber based silver gelatin photographic materials they have loved in the traditional darkroom. Digital Silver Imaging is one of the few service bureaus in the country and the world that produce fiber based silver gelatin digital prints.  Luckily for us, Eric Luden and his staff have been kind enough to help our students to experience their digital black-and-white images on these silver gelatin materials with their unique aesthetic and technical qualities.

Tom Ashe is the associate chair of MPS Digital Photography Department, School of Visual Arts in New York.  He is also an excellent photographer & consultant to the photographic industry. Visit his website for more information.


One of Tom's students, Azhar Chougle, had this to say about working with us:


"It has been an absolute pleasure to be able to work with Eric on producing digital silver gelatin prints. Working with labs is always a twisted and convoluted ballet, but in this case the process was surprisingly simple and straightforward. Given Eric's vast experience in the field, he demonstrates a firm understanding of his process and requirements. At the same time, he is incredibly personal and accommodating.  The most important factor is of course the prompt delivery and the print itself. The images produced take on a refreshingly analog quality, a welcome deviance from the manufactured predictability of the inkjet process. The papers (especially the fiber) are thick, heavy and feel exquisitely organic, something that would be expected walking out of a darkroom rather than a digital lab. I would say it is impossible to replicate the aura and feel of a silver gelatin print, which makes this avenue of digital output a very worthwhile exploration."