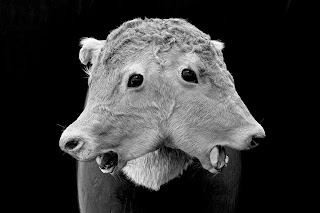 Beauty is always in the eye of the beholder. Guests attending last evenings gallery opening of the Griffin Museum of Photography @ Digital Silver Imaging were challenged to view the haunting elegance of anatomical specimens from the Mutter Museum in Philadelpia and the Lazzarro Spallanzani collection in Regio Emilia, Italy. Noted landscape photographer, Neal Rantoul, took a courageous departure by pulling back the curtain on this slice of human experience with grace and candor. Boldly curated by J.Sybylla Smith the 18 images of animal and human studies move beyond voyeuristic curiosity to ephemeral beauty. 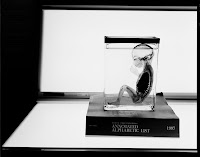 A steady stream of seasoned photo educators, staff and board members from Northeastern, Boston's Photographic Resource Center and the Griffin Museum including Glen Ruga, Director of the PRC, George Slade, and Cathy England concurred the work was "Luminous", "beautiful", "striking" and "strong". Represented by Panopticon Gallery, owner, Jason Landry and Neal's colleagues were pleased to see the new work in this intimate venue. A special edition book including extensive images from both collections along with the taxidermy from Cabelas is available for sale. The selenium toned silver gelatin and giclee ink jet prints are available in limited editions.
We are all looking forward to Rantoul's gallery talk on February 3rd. We are eager to hear him take us on the journey prompted by an NPR interview by Terry Gross with Gretchen Warden in 2002 on the Mutter to his international travels to illuminate and record this historic tradition.
You can view the complete collection of images in our online gallery.  Contact Digital Silver Imaging for information to purchase his prints or his book.
at 5:37 PM No comments:

Articulate and humor-filled descriptions of his creative process informed and entertained an eclectic audience at the Griffin Museum of Photography at Digital Silver Imaging's gallery talk last evening.  Photographer and videographer, Jonathan Stark, waxed poetically on the feelings evoked by  France, shooting with film and the “magical faith-based” moments of creating art.

Armed with 3 Nikon cameras, loaded with color and black and white film, Stark approaches his work with an open respect for the dialog between the subject - animate or not - and the shooter. Eagerly seeking resonance with his subject his goal is to “capture the energy.” The most important lens being that of his own emotion, imagination, and aesthetic. His desire to make a photograph overrides any sense of timidity or inclusion in another’s intimacy. Ask him about shooting the Hassidim in Jerusalem preparing for Passover.

A curious documentarian, Stark, exposes himself to the culture and ritual he discovers while traveling. What separates a photograph from a snapshot? In his view it is the willing involvement of the shooter to engage and exercise a disciplined and attentive awareness to one's inner vision. An artist transforms the obvious, moving beyond mere representation. Stark notes black and white photographic images convey emotion and render moments timeless in a way color cannot.

A diehard film fan, he favors the nuance of a silver gelatin print which cannot be mimicked by “spraying” ink on paper. Giclee and silver gelatin are different animals. Just as a diamond traveling across vinyl picks up the peaks and valleys of sound in a manner not replicated by high definition electronic transfer - we sense the difference in output despite the ability of our eyes to register the minute pixilation used in ink jet printing.

Darkroom magic is that inexplicable happening when the image unfolds its  secrets - the culmination of subject, light, exposure, framing, and myriad processes, both human and chemical, that birth a photograph. In Stark’s opinion art reflects relationship.

Stark approached Digital Silver Imaging's output as an experiment. He was both pleased and surprised with the results. "Digital Silver Imaging's printing technology enabled me to take a color transparency and convert it to black and white, which revealed the character that appealed to me, but had not translated in color. The DSI silver gelatin print made the image sing."

You can view all the images from the exhibit here.  Contact Eric Luden at Digital Silver Imaging for information about purchasing any of the prints from this exhibition.
at 7:59 PM No comments: 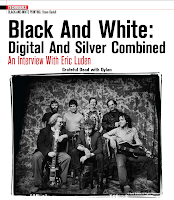 Shutterbug’s Steve Bedell interviewed Eric Luden about the current state of black and white printing and the tools that are available to photographers to obtain quality prints. The interview will run in the February 2011 issue of Shutterbug.

Read a pdf of the interview on your computer or grab a copy of Shutterbug.

Stay in touch with us on Facebook for gallery news and information about our lab.
at 4:53 PM No comments: